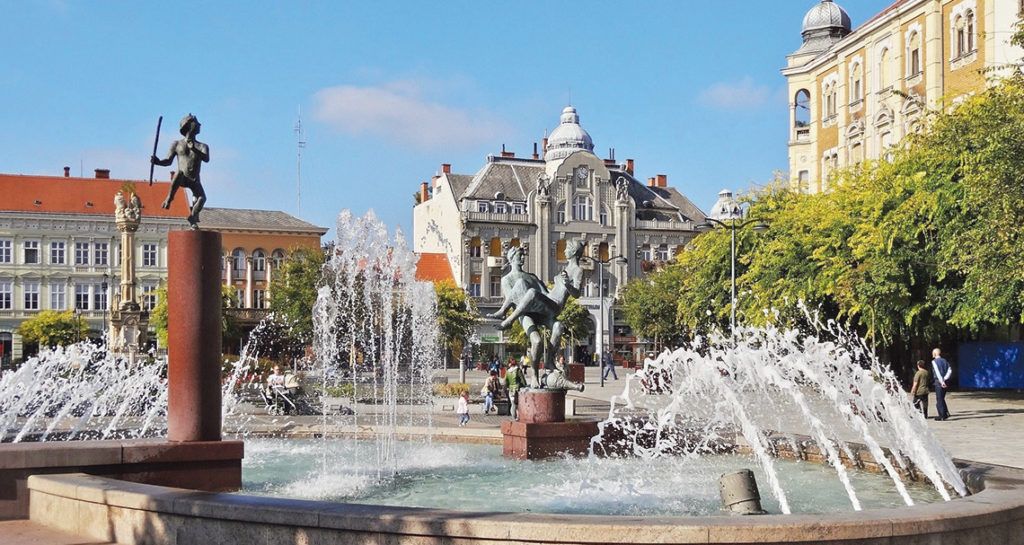 Joyce and the Hungarian connection

Szombathely might seem an unlikely place to stage a Bloomsday celebration, but James Joyce was careful to weave the Magyar city into Ulysses’s narrative, writes Michael Roddy

About a dozen of us, mostly Irish, mostly cold, stood on the wet and windswept main square of the western Hungarian city of Szombathely on a Monday in early May.

Members of a James Joyce reading group from Glasthule in south Dublin, we had travelled three hours from Budapest to see a sculpted bronze likeness of our hero. And there he was, thick specs, cane, boater hat and all, embedded in the wall of a building, from which he seemed to want to escape.

The statue, erected 15 years ago, is the most visible sign of an ambitious goal this small city, whose main industry is automotive parts, has set itself. It wants to be one of the whistlestops on the international Joycean Bloomsday circuit.

Bloomsday, June 16, is the date in 1904 when Joyce had his first date with his soon-to-be life partner, Nora Barnacle. He immortalised the occasion by making it the day in his novel Ulysses, loosely structured on Homer’s Odyssey, during which the half-Hungarian, half-Jewish but wholly Irish advert salesman Leopold Bloom takes a trek around Dublin.

The portly, circumspect but at times feisty Bloom attends a funeral, is almost brained with a biscuit tin thrown by an irate Fenian, comes within a whisker of encountering his wife’s playboy lover, has a psychedelic experience in the Monto nighttown and winds up back home, sleeping with his head at the foot of the bed, beside his unfaithful but loving Molly.

After you’ve walked in Bloom’s footsteps in Dublin and visited, as the Glasthule readers have, the other main cities where Joyce lived after he quit Ireland for good in 1912 (these being Trieste, Paris and Zurich), where else is there? The answer, with a bit of poetic licence, is Szombathely.

Although there is no evidence that Joyce ever visited Hungary, his Hungarian connections run deeper than you might think. To start, there is the panel of a huge Christ trilogy by the Ukrainian-Hungarian painter Mihály Munkácsy which Joyce saw on tour in Dublin in 1899.

Eva Fodor, a manager of the Deri Museum in Debrecen in eastern Hungary, where the “Ecce Homo” that Joyce saw resides, noted that the painting contains 73 portraits of people of every description – a fascinating range of characters.

Then there is Joyce’s fascination with the famously difficult Hungarian language, which he sprinkled into his books, making puns and jokes. One of them translates as “constipation brought on by 130 helpings of goulash”.

Hungarians’ appreciation for Joyce is reciprocated by Ulysses having been translated into Hungarian four times – two of those as extensive revisions of a 1974 version.

It doesn’t make it any more popular than elsewhere, Dr Ferenc Takács, president of the Hungarian James Joyce Society, notes in an email. “Most educated readers confess to finding (it) impossible to read Ulysses whether in the original or in Hungarian translation,” he says.

And finally, there is the “fictitious fact” that makes Szombathely inescapable: Leopold Bloom is the son of the émigré Hungarian Jew Rudolf Virág, whose last name means “flower” or “bloom” in Hungarian, and who comes from Szombathely.

That is why a city founded by the Romans and located a stone’s throw from the Austrian border is this weekend holding its 25th annual Bloomsday, extended to three days to mark the anniversary. Irish ambassador to Hungary Patrick Kelly was to be on hand for the Friday opening, after which the programme called for concerts, Irish music and food, a marathon or two, and today, Sunday, a U2 tribute band.

“Since 25 years ago, when Szombathely joined the Bloomsday celebrations all over the world, the relationship between the Hungarians and the Irish has become much stronger,” deputy mayor Tibor Koczka, speaking through an interpreter, told his visitors that day in May. “We keep saying that it is culture that brings people and countries together.”

Most of his audience were members of a reading group that meets on Wednesday mornings in Fitzgerald’s pub, near the James Joyce Tower & Museum in Sandycove. Mentored by self-taught Joyce enthusiast Robert Walsh, we decode, discuss and debate, but mostly have fun with the works of the modernist Irish author. We sing any song he references – and the music-loving Joyce seeded his works with plenty of them. 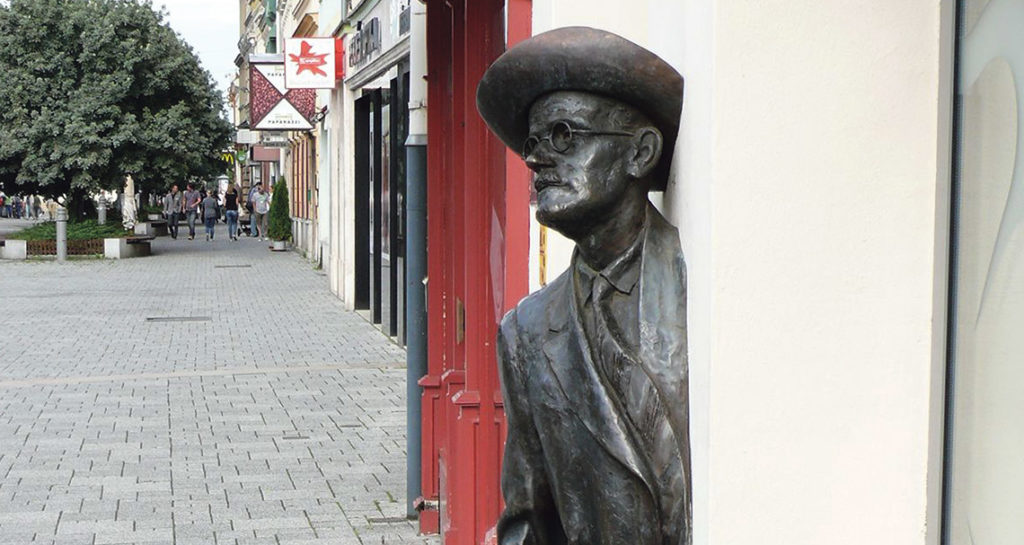 Joyce was living in the then Austro-Hungarian city of Trieste when he was churning out Ulysses. Sometimes making his living as an English-language teacher, often sponging off his brother Stanislaus, Joyce was wired into the cosmopolitan life of the bustling port city. Among its residents were Hungarian Jews from Szombathely, mostly engaged in the textile export-import business.

There is endless debate about how Joyce lit upon Szombathely, and a Bloom, or in German Blum, family for his background story. But if the shoe fits, wear it, and Joyce’s magpie instinct for devouring facts and anecdotes and weaving them into his own reality couldn’t have served him better.

Indeed, there was a Jewish family called Blum living in Szombathely, on the first floor of the residential building at 40-41 Fo Ter where the statue stands. The city, when Joyce was writing, had a thriving community of about 3,200 Jews, or about 10 percent of the population, according to local Joyce scholar Robert Orbán.

“Joyce couldn’t have known there was a Blum family in this house,” said Orbán, a big bear of a man, as we sheltered in the entryway. “But what Joyce may have known was that there had been a Blum family from Szombathely, wandering away somewhere.”

If the real Blums departed in the interwar period, they were lucky. In 1944, 2,476 of Szombathely’s Jews were deported to the Auschwitz death camp. Only a handful survived and today there are 40 Jewish residents, not enough to form a congregation, but enough to honour their memory.

Sándor Markus, 70, runs the Jewish Cultural Centre near the main square. It features photographs and biographies of 800 Szombathely Jews, who were everything from pharmacists and school teachers to butchers and musicians. 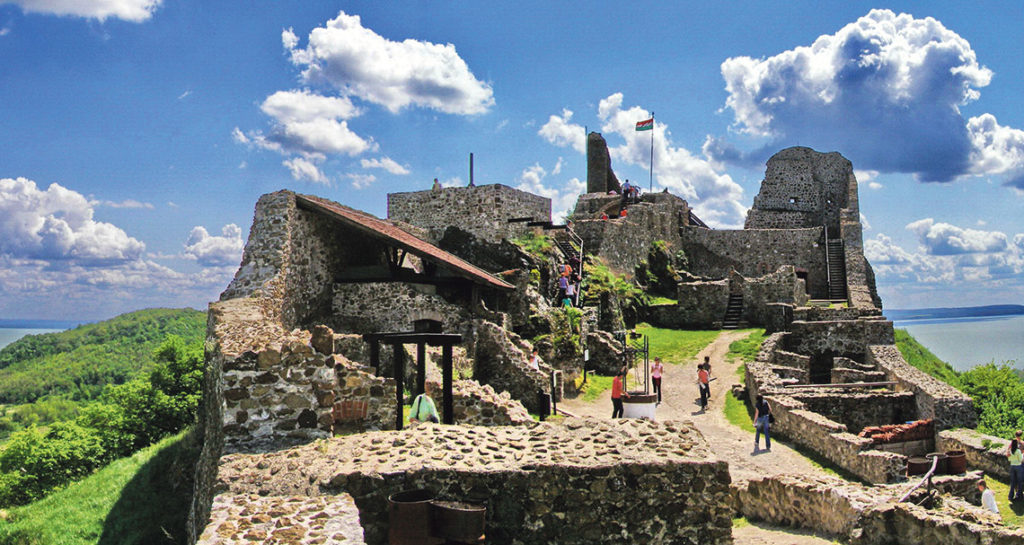 Rather than suffer that fate, Leopold Bloom’s progenitor, in Joyce’s imagination, made his way to Dublin from Szombathely, by way of Vienna, Budapest, Milan and London. He married Ellen Higgins, an Irish Protestant, converted to his wife’s religion and changed his name to Rudolph Bloom. He committed suicide in Ennis while Leopold was a young man.

If this seems a bit gloomy, don’t forget that Ulysses has Hungarian overtones. It is leavened by Irish humour, good spirits, music and hilarity, all of which shone through during the trip.

There were pensive moments, in the Jewish centre, and looking at the Munkácsy canvases. But we swam in the thermal baths in Sarvar, near Szombathely; tasted the famous Tokaji sweet wine in Tokaj; toured the spectacular ruins of Szigliget Castle overlooking Lake Balaton; saw an extinct volcano at Monoszlo; sang our heads off in restaurants and were invited to a reception at the Irish ambassador’s residence in the Buda hills.

North of Lake Balaton, we attended a wine tasting at Kaal Vineyards in the stunningly beautiful Kali Medenc (basin). There, the young winemaker Csaba Timar and his wife, Dorisz Szanyi, made us welcome on their sunlit terrace, with a view of the vineyards and the rolling hills.

Timar, who sold a business in Budapest to pursue his love of winemaking, plied us with delicate whites, a hearty red and, for the serious, a spectacular brandy. “Aaahs” of happiness filled the evening air.

“It’s a very little winery and I don’t want to be big,” Timar said. “I would like to do all the winemaking by myself, so I started this because I would like to make good wines. I have many guests from France or Germany or the British Isles and everybody says that Hungarian wines are fantastic, but nobody knows it. So it’s a big problem.”

Maybe the problem is not so big, now that a group of Irish is spreading the word – about Kaal Vineyards, the Deri Museum and a land that Joyce might have loved, had he only made it to the Hungarian city that his book has put on the Bloomsday map.

2 thoughts on “Joyce and the Hungarian connection”