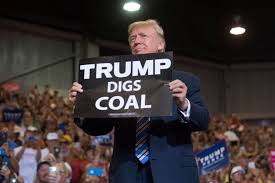 September 11 (IAN) – President Donald Trump announced today that he would seek legislation to require that all motor vehicles in the United States be coal-powered by the year 2040.

The decision appeared to be in response to recent moves by China, France and Britain to phase out the use of fossil fuels for motor vehicles and to switch to electric or other non-polluting power for auto engines before mid-century.

“America is blessed with great, absolutely huge resources of coal, and we have thousands and thousands of miners who are itching to plant seeds, water them, and then mine those stalks of coal,” Trump told cheering coalminers in Charleston, the state capitol of coal-rich West Virginia.

Trump said only “clean coal” would be used and added that by attaching a small coal wagon to the rear bumper, existing vehicles could be adapted to run on the fuel safely and cheaply.

“This terrific American coal is so clean that even babies can eat it for breakfast,” he said, holding up a hand-sized white oval object which he said was a piece of “clean coal”. A reporter who later examined the soap-like object said it had the word “Dove” inscribed on its surface.

Trump derided proponents of electric vehicles, including the billionaire Tesla founder Elon Musk, who resigned from a Trump business panel in protest after the president announced the U.S. was withdrawing from the Paris climate accord. “He was lazy, so lazy,” Trump said of Musk, who in addition to running Tesla has businesses building batteries, solar panels and developing a spacecraft.

“Electric vehicles electrocute their occupants,” Trump said. “So many people have been electrocuted in electric cars, then the car smashes into other vehicles and thousands of people die. Tens of thousands. The biggest casualty toll ever.”

Trump later flew to New Orleans where he was to oversee the start of an Army Corps of Engineers project to dismantle all the flood barriers and protective measures put in place by the Obama administration to prevent a recurrence of the damage caused by Hurricane Katrina.

One thought on “Trump wants coal-fired cars on U.S. roads”