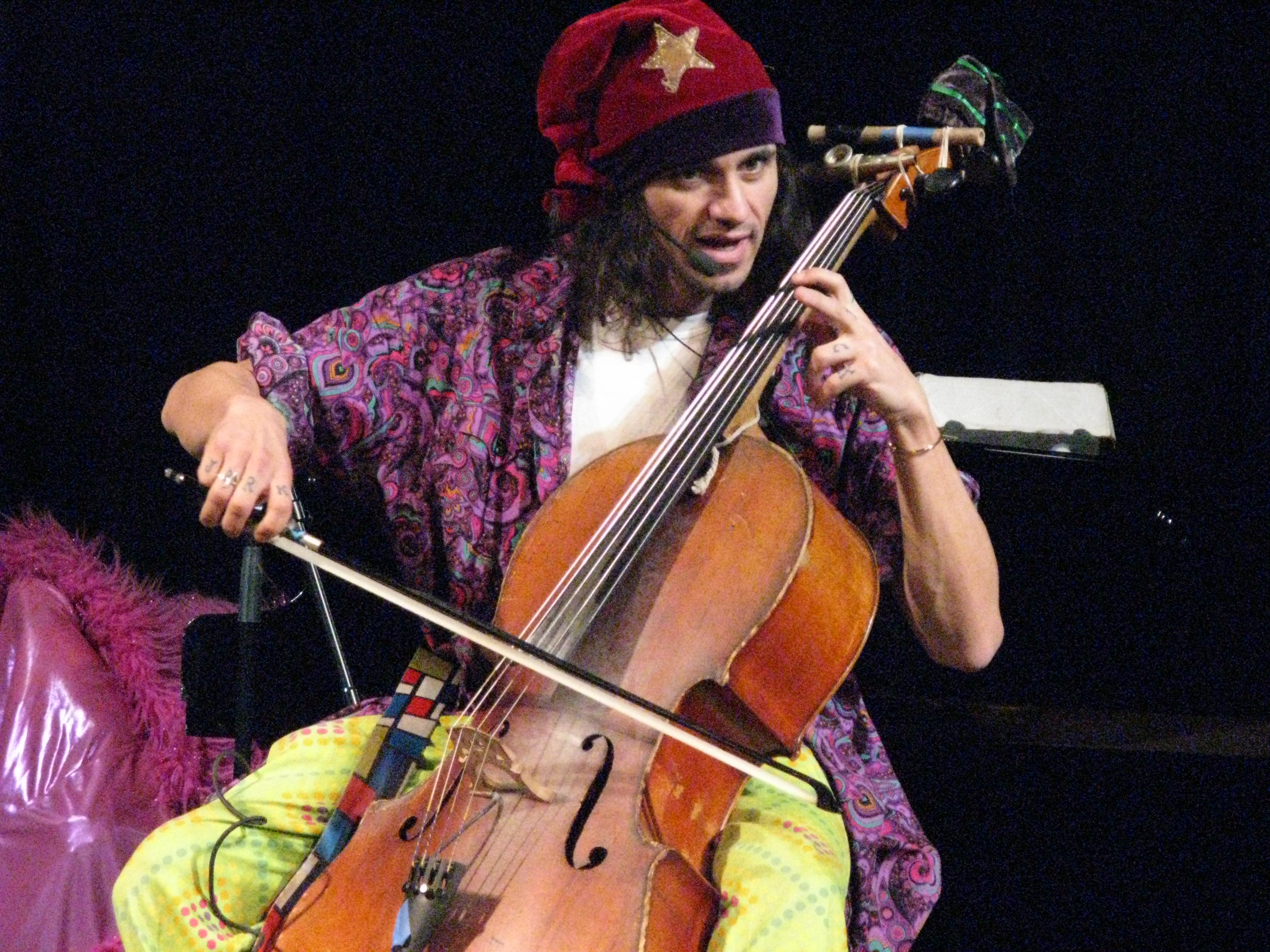 The Spike Dublin Alternative Cello Fest (Feb. 10-12) proved beyond a doubt what its co-organisers, cellists Lioba Petrie and Mary Barnecutt, wanted to show: The cello has a life and purpose way outside the classical music realm.

During three days of events at a variety of venues, including The Workman’s Club, the Hugh Lane Gallery and the National Concert Hall, the cello demonstrated that it can rock, play jazz, join in folk/rock ensembles and serve as a comedy prop.

“We decided for this festival anyway, because it’s alternative, we’ve completely turned our backs on its classical roots,” Petrie told IrishArtsNews.com. “So it’s everything but classical cello. That was our kind of starting point – it can’t be classical.”

Enter Californian Rushad Eggleston, a “cello jester” who wears a floppy jester’s cap with a star on it, clothes to match and who has floated on a river with a cello (that he says can still be played). Eggleston kept school pupils spellbound and laughing at his antics during two workshops, which were more like improv comedy sessions, in the National Concert Hall’s Studio space.

Demonstrating that you can dance around the stage and leap onto chairs while playing the cello, Eggleston imparted the advice that in song writing “you only have to say something that makes sense once in awhile”. He sang one of his ditties, “I Peed on a Bird”, which he said was based on a true story involving himself, a cliff and an unlucky cormorant.

“The humour for me keeps it light and I think in my opinion it doesn’t necessarily take away from the potential sublimeness,” Eggleston told IrishArtsNews.com. “It can be ridiculous and sublime – you can run the whole gamut you know.” (For a Podcast of the IrishArtsNews interview with Eggleston click on: (https://soundcloud.com/user-864880754/irish-arts-news-rushad-eggleston-spike-dublin-cello-fest)

or listen to it here:

On Friday Spike featured the “urban folk music” of Barnecutt’s group Mary and the Pigeons, Petrie’s solo cello accompaniment to the cult French sci-fi classic “La Jetee” plus the mordant-wit-cloaked-in-a-Laura-Ashley-look of folk cellist Vyvienne Long. “Put your money down, it don’t come back around,” Long sang, from seeming first-hand experience. On Saturday there was more from Eggleston, plus jazz from guitarist Hugh Buckley and Cello Ireland, and a jam session on Sunday.

The closest Spike got to classical was a solo recital by cellist Kate Ellis at the Hugh Lane on Sunday featuring works of Niall Vallely, Helmut Lachenmann, Sean Mac Erlaine, Judith Ring and Donnacha Dennehy. Lachenmann’s “Pression” of 1969 called upon Ellis to detune the cello and play it in every way except the usual. She got grating sounds by playing below the bridge, wispy sounds by running her fingers along the strings and an unusual pizzicato by hitting the strings with the wood of the bow.

Ring used the same below-the-bridge grating sound for her “up to my fholes”, a piece that sounded – as the name implies – like she was letting off steam. “It’s such an interesting instrument to explore all the different ranges of sound it can make,” Ring said. “It’s full of sounds, not just notes.”